We had such amazing weather, sunshine all day, and little wind, barring one afternoon of rain, and one windy day. Alex had an absolute ball. He spent most of each day either on the beach, in the swimming pool, or playing (i.e. jumping around like a lunatic) in the jacuzzi. His swimming has improved hugely, and he can now swim 3 to 4 lengths of the big pool in the complex by himself, with water wings of course. (we are not quite ready to ditch those yet!) He has always hated getting his face wet, or putting his head under the water, but seems to be over that now. He had a little accident riding his “lightning mcqueen fast” little red motor-bike on the patio / balcony, by panelling head first into the balustrade. He split his head open, and there was lots of blood, as head wounds are wont to do, but luckily the bleeding stopped easily and he didn’t need any stitches. And it’s under his hair, which he has a lot of, so the scar won’t matter. An ice lolly (his new favourite thing) helped cool the bump on his head down, and cooled him down too.  (I spent most of my time in the flat, waiting for Caris to wake up from her naps, but that is par for the course being a mom… but on the plus side, Alex had some great bonding time with Daddy. But we did at least get to go to the beach) Don’t you love the ponytail? 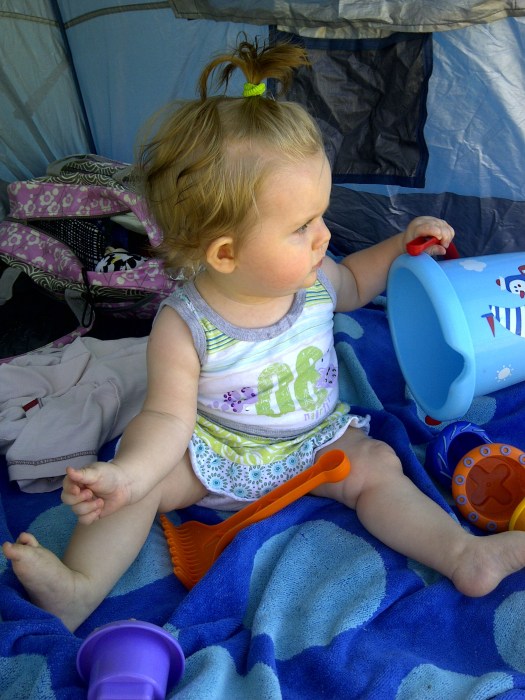 We bought the flat in Ballito when Alex was a year old, so this place will always be filled with memories for us, of Alex (and Caris) growing up. The first time we saw the place with the estate agent, was a few day’s after Alex’s first birthday, and he was toddling along the side of the couches on the patio, his head not yet tall enough to look over the top.

As much as we love the flat, it can get a little noisy over the festive season and other holiday periods, which is when we are typically there, so when we were there in December / January just past, we looked at a piece of land, with the intention of building a stand alone house.  Our offer was accepted, and the transfer should be going through in the next few days. We met with our prospective architect and builder while we were there this week, and are excited to start building our dream holiday home in a few months time. Although the prospect is also somewhat scary …. building a house 600 odd kilometers away, and Gary and I are both control freaks … it is going to be an adventure of note! (and no doubt, a test of patience)

So this was probably the last holiday we will spend there, as the flat is now for sale. Both Gary and I felt as if we were packing up for the last time, as we made the flat look it’s best before we came home on Wednesday. We left with feelings of sadness and excitement at the same time. But by Easter next year (hopefully) we will have a brand-spanking-new house to look forward to, where we can continue building memories!